Home > Blog > Learn > What Happens When a Puppy Gets Parvo 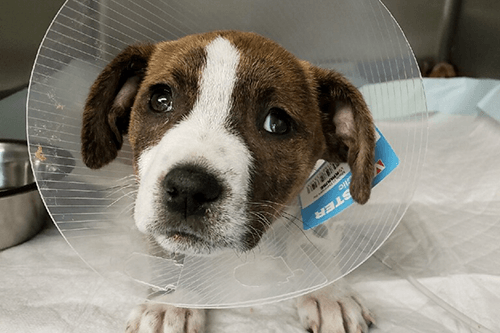 Luna wasn’t acting like herself. She was lethargic, and when she came in from the April chill, she was shaking, even though she was inside where it was warm. Her foster, Carien, tried to get her to eat, but she wouldn’t.

“When she was in front of her food, she just smelled it and looked at it,” Carien said. “I put her on the couch and offered her food, and she would push it away with her mouth. Then I decided to soak the food in warm water. She took a little bit in her mouth, but she did not swallow.”

Her concern grew when Luna next started vomiting. Not knowing what was happening to the eight-week-old puppy, Carien posted on the Twin Cities Pet Rescue foster page on Facebook with a video of Luna and a description of her symptoms.

Medical Director Dr. Kristen Harris saw the post and asked Carien to bring Luna to MetroPet Animal Hospital first thing in the morning. Then her suspicion was confirmed. Luna had parvo.

“Unfortunately, there’s no cure for parvo. All we can do is supportive care by keeping them hydrated with intravenous fluids, preventing secondary infections, controlling nausea, and getting the puppy to eat,” Dr. Harris explained. “Parvo is a really scary virus, but with aggressive care, it has an 80 to 90 percent survival rate. Without care, it is almost always fatal.”

Day 1
Luna spent the day hooked up to an IV. She began having diarrhea. That, added to her vomiting and refusal to eat or drink, put her at a high risk of dehydration, which is how many animals who contract the parvo virus die. The IV fluids were trying to counteract that. The MetroPet staff also administered anti-nausea medication to help her stop vomiting and two types of antibiotics to prevent secondary infections.

At the end of the day, Dr. Harris decided to have Luna spend the night at her house.

“Round-the-clock, aggressive supportive care is vital for puppies during the first few days after showing symptoms of parvo,” she said. “I took Luna home with me so I could monitor her closely and continue her IV fluids.”

Day 2
Day two of her hospitalization started much like the day before. Luna still was not eating and had vomiting and diarrhea. But, as the day went on and she continued to receive fluids and medication, she started to respond. She became more alert and began eating.

“She was starting to play and interact with my kids. She had a great appetite. She was almost like a new puppy,” she said. “She was lucky because she had received the first round of her parvo vaccine series, which helped her fight off the virus.”

Day 3
By day three, Luna’s symptoms went away and she was in stable condition. She was a playful puppy again and was able to return to her foster home. Her foster’s quick recognition of symptoms and reaching out for medical care was very important to Luna’s swift recovery.

Vaccinations
Dr. Harris had been following the standard vaccination schedule with Luna. This meant that by eight weeks, Luna had already received the first of her three parvo vaccinations (which is a part of the distemper combination vaccine). However, she had yet to build up a full immunity, which was how she was able to contract the virus.

Luna was born in Texas, but the timing of her infection meant that she picked up the virus after she arrived in Minnesota. After exposure to the virus, puppies typically show symptoms anywhere from seven to fourteen days later. It is important that people have their puppies avoid areas where other dogs who aren’t fully vaccinated congregate because parvo is highly contagious. This includes pet stores and dog parks. However, parvo lives in the ground, so Luna could have gotten the virus simply by playing in her backyard.

Now that Luna is healthy again, you can find her on our Adoptable Pets page.