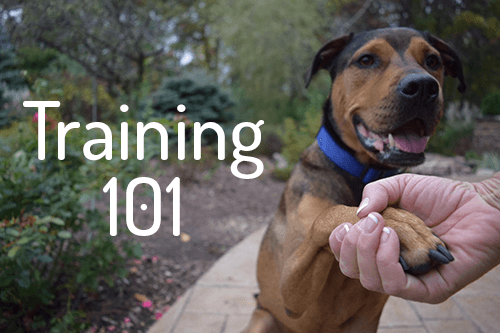 Odds are your dog probably knows how to sit. Most dogs learn this simple command with relative ease, and oftentimes it’s the only command a lot of dogs know. You should not allow training to stop there, however, and if the training hasn’t quite gotten there yet, now is a good time to start. Training your dog to do various tasks and respond to commands helps keep them mentally stimulated, improves balance and concentration, and can even strengthen the existing bond between you and your animal. Plus, who doesn’t like the idea of having a well-behaved and responsive pupper?

If you’re thinking about working with a trainer and/or attending any sort of obedience class you should know that the field of dog training is not a regulated one. There is no certification or license to obtain in order to be a trainer. In fact, literally anyone can call themselves a dog trainer or teach an obedience class. It’s your job to determine a trainer’s credibility – ask questions about their methods and experience, look at their reviews online, ask for references and actually call those people, and, most importantly, make sure they use and advocate for positive-reinforcement training only!

What is positive-reinforcement training? In a nutshell, it’s rewarding the behaviors you want to see more of with some type of valuable incentive. Most people use treats as the incentive and this works well because a large number of dogs are food-motivated. Here’s an example of how positive reinforcement looks: I want Rufus to sit so I say “Rufus. Sit.” Rufus sits, and I give him the treat. Maybe a little high-five too…once he learns that, of course.

Because I gave Rufus an incentive of value, he is much more likely to repeat the behavior the next time I ask him to do it. Repetition plays a key role in training, so does consistency. Ask your dog to repeat the behavior or “trick” several times, giving him a treat each time he does it. Be sure you are consistent in your treat-giving too! If he sits when you tell him to and you don’t reward the behavior, he’s less likely to repeat it when you ask in the future. Studies show that positive-reinforcement training works faster and is more effective than aversive, or “punishment-based”, training methods.

Speaking of punitive training methods, let’s explore them a bit.

There is a lot of available neckwear out there that is designed to cause your dog pain as a means of training him. Choke chains, prong collars, citronella collars, and shock collars are some of the more popular tools used in what’s known as aversive training. They’re meant to cause your pet physical pain in order to teach him what not to do, and it works a little something like this: Your dog is pulling on hard on his leash so you give a sharp tug on the leash causing his prong collar to pinch into his neck. Your dog suddenly feels pain, which, in theory is supposed to let him know that the behavior is undesirable and that he should stop. In short, you cause your dog to have an unpleasant experience in hopes it will deter him from repeating the behavior.

One of the problems with this method is that your pet doesn’t learn anything other than behavior X = pain. It doesn’t teach him what to do instead. Yes, you’ve now taught your dog that every time he barks he’s going to be sprayed in the face with citronella, but you haven’t taught him what you’d like him to do instead of barking. If you want a certain behavior to stop, you need to teach your pet the proper behavior to replace it with.

I think one of the worst things about using these types of collars is that they can cause your pet some serious harm. Because there is no way to control how tightly a choke chain can choke, dogs can incur severe injuries – and you severe vet bills – from using one. Both choke chains and prong collars can result in injuries to blood vessels in the eyes, permanent damage to the esophagus and/or trachea, nerve damage, paralysis, and even death. Shock collars have been known to malfunction, which can cause electrical burns or even death.

No doubt you’ve seen the sign in someone’s yard to indicate that they have an Invisible Fence, and not to be terrified when their dog comes bolting straight at you while you’re on the sidewalk. The way these systems work is by having a wire installed underground around the perimeter of your yard. This wire has a signal that transmits a shock to your dog whenever he gets too close to the wire or attempts to cross the boundary via a device attached to his collar. It’s supposed to teach your dog to stay in his appointed area.

One of the top things to be aware of about these “fences” is that they do not prevent other animals from getting in. If coyotes, wolves, other dogs, or even some particularly mean cats prowl your neighborhood, they are free to approach your pet without any deterrent. And if your pet has learned well enough to fear that shock, he won’t try to escape. Or perhaps he becomes super motivated and does manage to escape. Your dog may decide that a shock is worth a self-guided tour of the community. This leads to other complications and potential discussions with animal control officers. Whereas a real fence gives your dog a physical boundary that he can see and understand as a limitation, an electric fence has a bit more guesswork to it. It’s not uncommon for dogs to be shocked after the visual markers of the boundary are taken away. Even worse, your dog could end up learning to associate the painful shock sensation he feels with whatever he’s seeing on the other side of the “fence.” This may cause misdirected aggression and/or fear-based responses. In fact, studies have shown that dogs who are trained through punishment tend exhibit more anxious and aggressive behaviors than dogs who receive positive-reinforcement training.

Learning to train your dog using positive-reinforcement training methods doesn’t require an advanced degree in animal behavior or veterinary medicine. What it does require is repetition, consistency, and patience. One thing to be mindful of is the unintentional positive reinforcement we’re so inclined to give our dogs. When your puppy jumps stands up against your legs with his mouth wide open, wagging his little tail, what do you do? You bend down to greet him, pet him, and unintentionally end up positively reinforcing a behavior that you probably don’t want to continue as he grows up. “But! I must pet the puppy!” you might say, and I completely empathize. I insist on petting puppies too. But positively reinforcing undesirable behaviors can make them very hard to break later in life. The best thing to do when your dog is exhibiting an undesirable behavior is to ignore it or redirect it into an alternate behavior. For example, your puppy is chewing on your fingertips. You redirect this to a positive and acceptable behavior by putting a chew toy into his mouth instead. Once he starts chewing on the toy instead, you can reward him. It’s a good idea to keep treats nearby when you’re working on training, but ear rubs and back scratches can work fairly well when treats aren’t readily available.

There is a lot of other information out there for training your pup, and I highly recommend asking your veterinarian for further information about positive-reinforcement training. He or she may also have some ideas for trainers or classes that might be helpful for you and your dog.