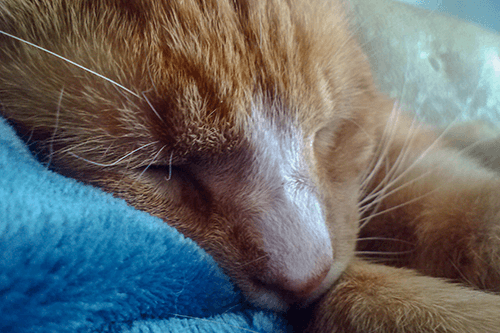 That’s how long Alfonzo spent in rescue. Not because he was a naughty cat, or required a special, hard-to-find home. Alfonzo was a friendly, affectionate, outgoing cat who even came with a little kitty brother that he loved dearly. He used his litter box well, loved playing with people, and wanted nothing more than to lounge in the sun most of the day. But Alfonzo tested positive for Feline Leukemia Virus (FeLV) when he entered rescue, and so for over four years, Alfonzo waited for a forever home without receiving a single adoption application.

FeLV is one of the most common infectious diseases in cats. While rates have declined significantly with the development of a more effective vaccine strategy and improved testing protocols, FeLV remains a chronic problem, especially in shelter situations where immune systems are already stressed and cats are kept in close contact. FeLV is spread when the virus sheds in feline body fluids (such as saliva, urine, milk, and blood) and comes in relatively close contact with another cat (such as through a bite, during grooming, or while nursing).

FeLV is a chronic infection, meaning that, in the majority of cases, it is lifelong and without cure. That is because FeLV is a retrovirus, similar to FIV, or HIV in humans. A critical step in the lifecycle of these viruses is integration into the host’s DNA, meaning that the virus literally becomes a part of the cat’s genetic make-up. As cells grow and divide, they bring the virus along with, making it nearly impossible to clear. Some cats are able to mount an effective immune response to reduce replication of the virus and keep the infection under control for an extended period. In very rare instances, some immune responses are so effective that they completely clear the virus and eliminate the infection.

In most cases, though, the infected cat will succumb to the infection within about three years. Some live longer, and some infections are more aggressive, but they are almost guaranteed to have a shorter lifespan. And that is where most adopters get turned off. The disease isn’t expensive to manage – for the most part, cats with FeLV live normal, happy lives. But many individuals cannot cope with the idea of saying goodbye early, and so these kitties wait, sometimes for their whole lives, for someone to come along who can understand what their disease means for them and who will love them anyway.

Alfonzo waited his whole life, and unfortunately never found “the one”. When he began to show signs that his disease was progressing and that his quality of life was diminishing, he was allowed to peacefully cross the Rainbow Bridge alongside his foster and veterinary team who had cared for him for so long. The TCPR team was heartbroken for Alfonzo. He had made quite the impact on the volunteers and staff who had loved him. Stephanie, Alfonzo’s foster, was so moved by Alfonzo and his life that after his passing, she adopted his little brother Pepe, who also has the virus, making him one of the first FeLV+ cats adopted from Twin Cities Pet Rescue. “Having lost his foster brother, we wanted to make sure Pepe didn’t lose any more members of his family,” Stephanie says. “We are so happy to be his forever home.”

But Alfonzo and Pepe were not alone – there are many cats in need of homes that are positive for FeLV who are looked over and passed up every single day. Not just at TCPR, but in shelters and rescues across the country. Due to several recent high risk intakes (such as from hoarding situations or over-crowded shelters), TCPR has had 12 cats arrive in rescue recently who have tested positive for FeLV or who have been exposed to the virus.

Edris was one of the first of these cats. Shortly after he was adopted, Edris tested positive for the virus, and with another cat in the home, he was quickly returned to rescue. Edris’s foster, Teresa, had toyed with the idea of adopting him before, but with his return, it felt like a sign, and Edris became a permanent member of the home. But she had worried that adopting a cat with FeLV would mean that she wouldn’t be able to continue fostering and helping other cats in need. Until Theodore came along, who had also tested positive for the virus and needed a place to go. Teresa gladly opened her home to Theodore, and again found that she had fallen in love. Since then, Teresa’s home became a safe place for cats that tested positive for FeLV, and she has fostered two other FeLV+ kittens.

Before adopting Edris, Teresa had fostered cats without the virus. “It has been exactly the same. If you came to my place and saw all four of the cats, you wouldn’t know without someone telling you that they have FeLV. They look and act like completely healthy, normal cats, because they are.”

Many potential adopters worry that a chronic infection with a virus means that these cats are “sick” and need additional vetting, but that’s not the case. “They need to go in for annual wellness checks just like any other cat, but there’s nothing extra that needs to be done,” Dr. Harris explains. Dr. Harris is the veterinarian at MetroPet Animal Hospital and cares for all of the animals at TCPR, including the cats with FeLV. She was an instrumental part of Alfonzo’s care team, and continues to care for all of our FeLV+ foster cats. “They should be seen regularly to monitor for changes in their health, but it’s the same as for any other cat.”

But there is one aspect of caring for a foster cat with FeLV that is different – it’s significantly harder for these cats to find homes, and that can be hard on rescues and fosters. “I know the likelihood of them getting adopted is slim, which really breaks my heart,” Teresa says. “These cats are deserving of a loving home, snuggles, friendship, and family just like any other.”

Many adopters struggle with the thought of losing a pet early, and choose not to adopt an FeLV+ cat to avoid the emotional burden of a shortened life expectancy. Any cat can have unexpected health concerns, but the guarantee is often too much for people to handle. So these cats wait, often for their entire lifetimes, for a chance encounter with an understanding soul that may never come. Rescues know this, and because it can be burdensome to tie up a foster home for the entire life of a cat, few are able to take in these cats from shelters or vet offices when they show up. Shelters know this as well, and unfortunately that means that many cats that test positive for the virus have their lives cut even shorter to keep space open for cats that have a better chance at being saved.

But we’ve been able to make a small difference – in addition to Edris, Theodore, and Pepe, who were able to find their forever homes with loving fosters, there are 7 other cats still at TCPR who have tested positive for FeLV or who have been exposed to the virus who have made it out of shelters and impounds and are safe in foster homes. But they need your help, too. Our hope is that all of these cats can find forever homes to live out the rest of their lives. We know it’s an ambitious goal, but we know there are people out there for all of them.

Looking for an adult cat who loves lounging and snuggling? Check out Jack, our longest current FeLV+ resident. Looking for a pair of kittens to keep each other company? Many of our positive cats already live with a sibling or friend! Consider Bianca & Casper, a young sibling duo who get along with dogs, or Kaia & Piper, an adorable pair of sisters who would to be adopted together. Looking for a single kitten to spoil and shower with love? Check out Olive, a spunky orange tabby, or Sofi, a sweet, snuggly kitten.

An FeLV diagnosis can be daunting for an adopter. We understand. We feel it too as a rescue. But it doesn’t mean these cats are any less deserving of a second chance at life. As Stephanie says, “A shortened lifespan just gives you more reason to appreciate and love every moment with your cat.” All of these cats are loving, affectionate, well-mannered kitties just waiting for a family to love them unconditionally. Alfonzo waited 4 years for that person to come along, and while he always felt at home with his foster mom, our hearts break knowing he never had a family of his own. These cats are every bit as deserving of love, and we are confident that with increased awareness of what FeLV means for both cats and adopters, there are homes out there for every single one of them.