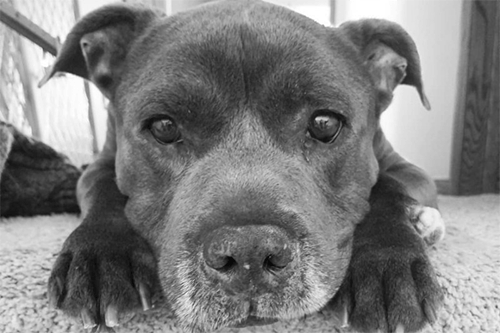 This is part one of an occasional series showing the medical care that goes into helping our dogs and cats.

Dr. Kristen Harris, medical director of Twin Cities Pet Rescue, didn’t think Solomon was going to make it. When the twelve-year-old pit bull mix arrived at her clinic, MetroPet Animal Hospital, from animal control on the night of March 5, his abdomen was large and distended due to fluid building up, and he was struggling to breathe and move around. Using a stethoscope, she determined Solomon had both a heart murmur and an arrhythmia, an improper beating of the heart.

“I removed some of the fluid to keep him comfortable,” she said, “but he needed medical treatment long before he came to me. I was worried it was just too late.”

Still, she ordered tests to confirm what was wrong and to find whether he had any hope of survival.

The next day, Dr. Michelle Kaner brought her mobile ultrasound unit to MetroPet specifically for Solomon’s tests. She, Dr. Harris, and veterinary technician Heather O’Gorman performed an ultrasound on Solomon’s abdomen and heart. This test confirmed Dr. Harris’s original assessment that his heart was not working correctly, which was causing fluid to build up around his organs. To confirm his arrhythmia, they also did an EKG. After the tests, they again removed a large amount of fluid from Solomon’s abdomen, which provided immediate, if temporary, relief to him.

Despite his condition, Solomon was in good spirits, enjoying the affection the MetroPet team lavished on him between seeing patients. Heather, who is also a kitten foster for Twin Cities Pet Rescue, fell for Solomon’s gentle and loving demeanor and offered to take him home and be his hospice caretaker. She expected to only have him for a few days, but she wanted to provide him with all the love she could for what time he had left.

That afternoon, Dr. Harris faxed the EKG results to the University of Minnesota’s veterinary cardiology specialist. They diagnosed Solomon with right-sided heart failure due to untreated heart disease and atrial fibrillation, a dangerous form of arrhythmia.

She immediately prescribed four different medications for Solomon to help keep the fluid from building up again and to help his heart beat in a normal rhythm. Dr. Harris had done what she could for him; now it was time to hope the medication worked.

Solomon went home with Heather that night. Right away he bonded with her three-legged pit bull mix, Oscar, and rarely left his side. He quickly fell into a routine of napping with Oscar by the fireplace, begging Heather and her family for bites of their food, and playing catch in their fenced-in backyard.

“Solomon has been a complete joy to my entire family, and it’s hard to imagine that we ever felt complete before he came into our home,” Heather said. “Though he’s mostly a lazy old man, he still has so much spirit. He’ll follow me around the house—even jumping into the shower with me! And I swear he can hear a deli ham package opening from a mile away!”

When he arrived a week later for his checkup, he looked like a new dog. He stepped on the scale, and it showed he had lost ten pounds of fluid; the medication was working! The dog no one expected to live more than days now had a new lease on life. Solomon may have months or perhaps a year left. That part is not known. What everyone who sees Solomon (who is now the unofficial greater at MetroPet) knows is that he is one happy dog.

Twin Cities Pet Rescue is committed to the health and well-being of all its dogs and cats, including our senior animals with medical conditions like Solomon. However, this means paying for costly tests and treatments. Please consider contributing to Solomon’s care by donating to his medical fundraiser. You can do so here: https://www.gofundme.com/weheartsolomon