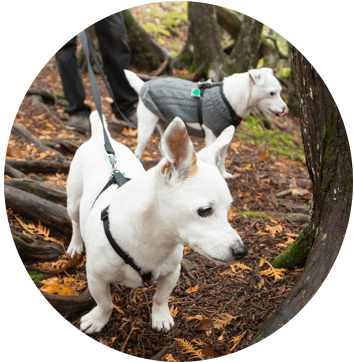 This Happy Tail is brought to you by: Elliot & Betsy! Elliot was rescued from Minneapolis Animal Care and Control early in 2011. It took him a little longer to find his home because he wasn’t a young dog. He was adopted in August, 2011 when he was 6 to 7 years old. Betsy was rescued from a puppy mill and then came to TCPR in the summer of 2012 when she was 1 to 2 years old. Betsy was then adopted in October, 2012 and joined Elliot’s family. Both Elliot and Betsy shared a story of bad teeth while with TCPR and needed major dentals, and Betsy even had TWO dentals in the few months she was with us her teeth were in such bad shape after living in the puppy mill! They are loving life today, and have much better dental health too! Here is what their family has to say about them now: “We adopted Elliot in August 2011 when he was approximately 6-7 years old. We knew the minute we saw his picture that we had to meet him. He is such a character, and has such a funny personality. When we take him for walks, people laugh out loud when they see how ridiculously happy he is to be out exploring the world. We enjoy having a dog that makes so many people smile. Just over a year later, in Oct 2012, we saw a picture of Betsy in a TCPR newsletter, and because they look so much alike, we set up a meeting for the two dogs. I can’t say they were instantly friends, but they seemed to accept each other, so we decided to add her to our family. Betsy looks to Elliot for guidance every day, and her confidence is growing, too. She’s started playing with toys, which we absolutely love to see.

These two love going for walks, and just being lazy around the house together. We are so happy we found them both, and can’t imagine life without either one of them.”

Thank you to Elliot and Betsy’s family for giving them both a wonderful home!