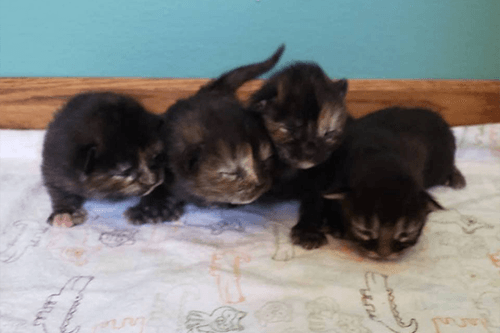 Twin Cities Pet Rescue takes in animals locally and also from overflowing, high-kill shelters in Texas, where there aren’t enough rescues to fill the need. This is how we found Lacey, a nine-month-old black cat.

While she was in foster care in Texas awaiting transport to Minnesota, her caretaker noticed something interesting.

“Her foster noted that her belly was getting rounder. We weren’t sure if that was due to her finally getting some nutrition and consistent meals or if she was pregnant,” said Jill, the head of the Twin Cities Pet Rescue cat team.

Once she arrived in Minnesota, she went to MetroPet Animal Hospital, where Medical Director Dr. Kristen Harris examined her and determined that she was, in fact, pregnant. She took an X-ray of Lacey’s abdomen to see how many kittens she could expect and to get a better idea of far along she was. It revealed four kittens who had probably been gestating between 45 and 50 days.

After that, Lacey went to live at her new foster’s house. Her foster made a special room for her where she could feel comfortable and safe during birth and while caring for the kittens. She also spent a lot of time with Lacey, so the cat would allow her to handle her babies.

There was some concern Lacey would have difficulties during birth because she is not yet full grown. Cats don’t stop growing until they are 12 months old, but they can get pregnant as early as four months.

“This is a babies having babies situation,” Dr. Harris joked. “Unfortunately, when the mother is so young, we see more complications, such as the need for an emergency C-section or the mother not being willing to care for her newborns.”

Lacey soon gave birth to four healthy baby girls with no complications. It took her a few days to realize how she needed to care for them, and at first she wasn’t as attentive as she needed to be. But she caught on to motherhood and has been tending to her kittens well ever since.